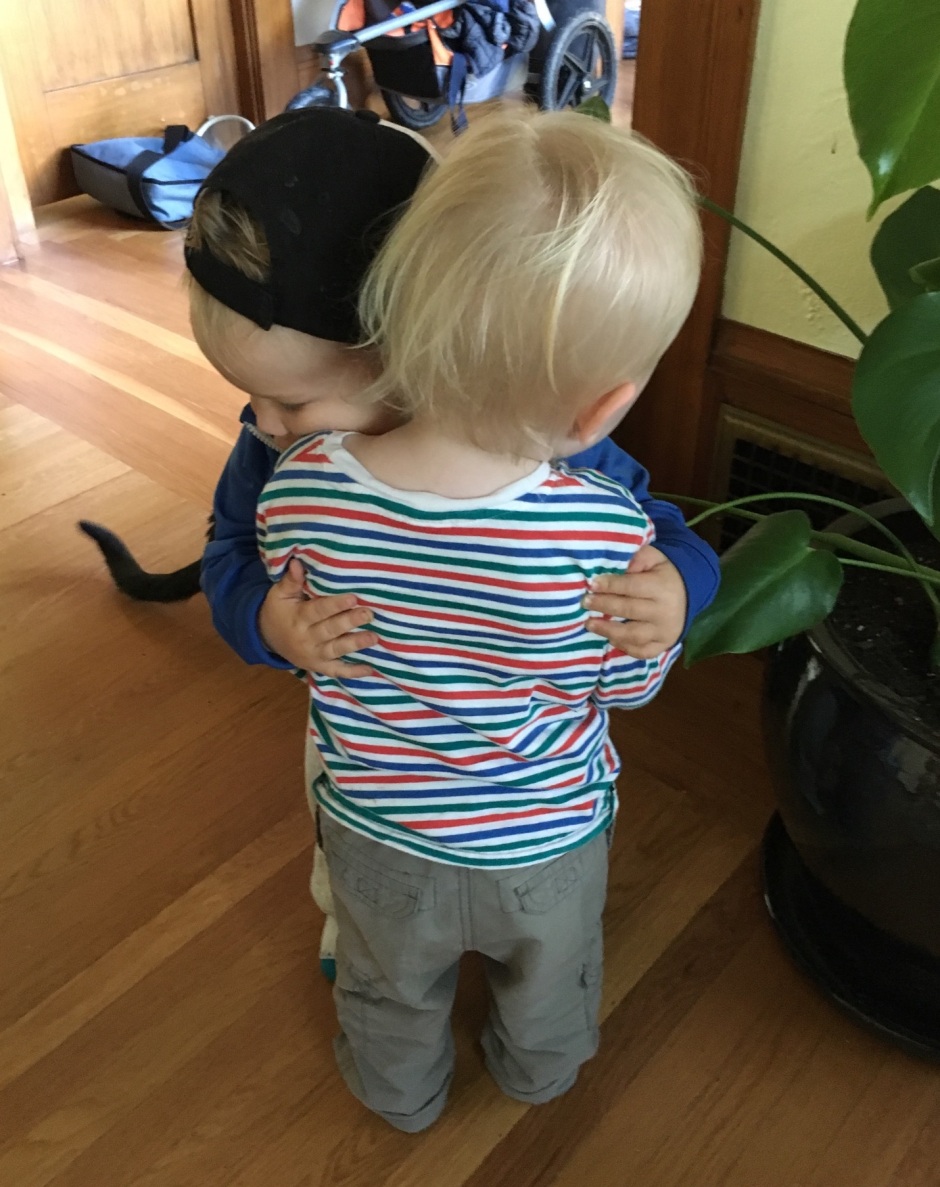 When it comes to making friends while traveling, I’m what you might call a “hustler.” No matter what, I’ll get the job done and end up with at least one good friend and a few acquaintances by the end of a 3-month assignment. But when Long Beach was proving harder to make friends than I had bargained for, I decided to take desperate measures and sign up for a Tinder account to try to make friends. This is my experience.

To start, I took certain steps to make my Tinder experience as platonic as possible, such as:

1. Limiting my matches to women only. This was just a preference for me. I didn’t want to deal with any guys that would act interested in friendship at first but expect it to go somewhere romantic later, despite me already being in a committed relationship. To weed out this kind of riffraff, I stuck to just women. Plus, women are awesome.

2. Stating up front with the first line in my bio, “Just here to make friends!” It seems like this would be a given, but I came across a lot of single ladies who were apparently trying to make friends as well, yet didn’t quite state it in their bios. Instead their bios would say something like, “I just moved here and don’t know anyone!” or just a list of things they love. This left it to my discretion whether or not it was safe to swipe right for friendship. I judged a lot of photos if I was unsure. If her photos were of her hiking (so many hiking photos) or hanging out with her dog (so many dog photos), I’d probably take a chance and swipe right.

After taking those few steps to make my intentions clear, I dove into the world of Tinder, and here is what I experienced:

Bios are essential for someone looking to make friends on Tinder.

Unlike with dating, most people don’t go about making their friends by first determining if they’re physically attracted to them or not. As a friend, your physical looks are just not important to me at all. I want to know about your interests, if you have a sense of humor, if you read good books, and if you’re down to hang. Therefore, whenever I came across a Tinder bio that was empty, I swiped left. Whenever I came across a Tinder bio that asked, “Does anyone actually read these things?” I declared, “Yes! I do!” Then I swiped left.

Everyone on Tinder in the LA area is looking or someone with an Annual Disneyland Pass.

Or vice versa, some people on Tinder already have the Disneyland pass and are looking for people to go with. The reasoning is that it’s really expensive to own a pass, and the only way to justify paying for one is to go a LOT of times throughout the year. Those who don’t want to buy one are looking to piggyback on the passes of others, while those who already have a pass also have friends who, understandably, don’t need to take 10 trips to Disneyland every year, and so the pass holder has to look elsewhere.

So basically, anyone with the pass shoots automatically to the top of the LA Tinder food chain and can be as picky as they want with their right swipes, because everyone will match them back. I don’t like or care about Disneyland (not sorry), but even I started feeling like this whole Tinder-friend-making process would go quicker if I had that pass. But then, how would I ever know if my new Tinder friends like me for me? Would our friendship ever truly be real?

Much of the awkwardness of online dating was present.

Even though I wasn’t looking for anything romantic, I still found myself experiencing some of the same things that my friends who do date on Tinder have also dealt with. For example, I was constantly editing my bio at first. Sometimes I would think it was perfect, and then after five minutes of swiping I’d realize that my bio sounds more like a resume than a profile and anyone who sees it will most certainly swipe left at the dorky list of skills and qualities in front of them. Or, even more neurotically, I would think my bio was fine and then come across other people who had something in their bio that I related to but OMG I TOTALLY FORGOT TO EXPRESS IT AND NOW THEY MAY NEVER MATCH WITH ME BECAUSE I FORGOT TO SAY THAT I LIKE CAMPING AND WHAT IF OUR FRIENDSHIP WAS MEANT TO BE BUT NEVER HAPPENED BECAUSE THEY DIDN’T KNOW, THEY JUST DIDN’T KNOW?!

Much of the frustration of online dating was also present.

Starting a conversation with someone you’ve matched with – What do you say? Because eventually I get sick of the same old “Hey how’s it going?” and a lot of people aren’t interested enough to respond to that anyway. Sending a smiley face just felt too flirty for friendship. Sometimes I would remark on something I read in their bio and realize later that I definitely came off creepy or lame. I very quickly felt the need to market myself with everything I did, and would second-guess myself later if I didn’t receive a response.

Never having used Tinder for dating, I initially thought this wouldn’t be that hard. “I’ll just be myself,” I thought, “because I’m awesome and really good at showing it!” But the thing is, people don’t know I’m awesome from an app. And TELLING them I’m awesome is the worst, and trying to make a total stranger laugh is actually pretty difficult. It’s not that I didn’t know how to go about connecting with someone, but more that I found myself navigating mirky waters of social interaction as I felt weighing on me this expectation to charm someone instantaneously, but without misleading them on a platform primarily used for dating.

Whenever I did engage in good conversation with someone, it would carry on for days. But then the second I would suggest taking this convo to a next level, meet-in-person situation, the girl on the other end of the convo would disappear! Or deflect for days until I eventually gave up. I mean seriously, I had 97 matches and I maybe got 6 phone numbers out of that, 4 of which actually led to hanging out in person. I understand why some girls put, “Swipe left if you’re not interested in actually meeting up!” in their bio, because seriously, so many people on Tinder will just chat forever. Which to me, is completely worthless. I have plenty of friends to text all day. I’m a traveler in a new city, and I want a friend to experience this physical space with me.

Accidentally sending someone a “Super Like” is WAY creepier when you’re just trying to be friends.

For those of you who left Tinder before this update, “Super Like” is the like button you press when you want the other person to know you swiped right for them, and well, you SUPER LIKE them. Unless you pay for an upgraded Tinder account, you only get one “Super Like” per day, so it’s kind of a strong gesture. I actually haven’t met anyone who really uses the “Super Like” button.

To “Super Like” someone requires only a mere swipe up of your thumb. Which, with all the swiping left and right of different people’s profiles, can easily happen accidentally. It’s mortifying when it does, but if you’re looking to date the person, I guess it could come off as flirty, cute, or flattering. But when you get a “Super Like” from someone just trying to be your friend, it’s pretty creepy.

“Hey I am friendless right now, and I don’t know you, but I REALLY want you to be my friend.”

It happened to me twice accidentally, and neither one of those girls have swiped right for me yet. I don’t blame them.

Meeting in person was weird at first.

At some point the usual question had to come up; “So, what brought you to Tinder?” But somehow it just seems like it would be more natural to ask someone about their intentions when you’re setting up a romantic relationship rather than a friendship. I’ve never gone into a friendship asking the other person what they are looking for in a friend or why they came to be looking for friendship in the first place. That being said, it has been interesting hearing about how other girls discovered that Tinder could be used for making friends. One of the girls who I met up with has a best friend who was recently diagnosed Lupus, and while this girl spends a lot of time by her friend’s bed hanging out with her, she eventually decided to look to Tinder to find new girlfriends to go out with on the weekends.

Making friends through a text conversation format pushed me to explore more of Long Beach.

Everyone I spoke with asked me what I had discovered so far in Long Beach. Answering this question over and over again, I felt motivated to not have the same answers every time. What had I explored in Long Beach? Surely in the first month I had ventured beyond 4th street restaurants and thrift stores?

One girl I met up with had lived in Long Beach her entire life, despite a brief college experience in rural northern New Mexico. She was a single mother of a 3-year-old, living with her parents, and was using Tinder to both date women and make friends – whatever relationship was worth getting away from her family sometimes to socialize. She took me to Yogurtland for my first time, a very California experience of frozen yogurt. Then I introduced her to open mics in the area that she had never even heard of before. Together we began listening to local music and reading local poet’s works. Although she grew up in Long Beach, she was just as much a newcomer as I was in the way that often happens after you go away to college and come back to experience your hometown as an adult.

So there you have it. If I had to rate my experience of finding friends on Tinder, I would probably give it a 6 out of 10. I did make friends with people with whom I probably would have never struck up a conversation otherwise. But even without the dating aspect, Tinder is unreliable and exhausting in its mystery. My fiancé and I leave for San Francisco in a week, and instead of jumping back on Tinder, I think I will try out FriendZone, an app I recently heard about that is used just for making friends. I’ll post about it if there’s anything worth sharing.